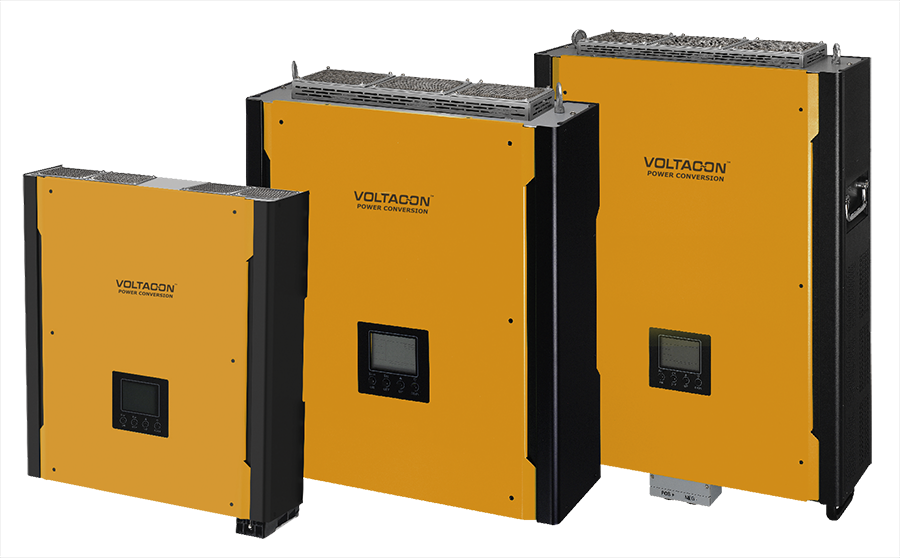 Posted at 09:20h in Energy News by Energy Experts 0 Comments

On the 27th April, the Energy Network association (ENA) EREC regulations will be changing to G98 & G99. As with the previous standards, G99 is applicable to inverters with a rating above 16A per phase, and G98 applies to inverters with a rating below 16A per phase.  G98 replaces G83 and G99 replaces the G59 standard. When installing the new Voltacon inverter (Voltasol Hybrid Grid Tie)  the new standards are applied when commissioning the inverter(s). All Voltasol Inverter (3kW, 5kW, 5.5kW and 10kW)  are certified to the new ENA EREC regulations.

Since the feed in tariff program stopped, the regulations for grid tie inverters have been changed, that means the inverters are now limited to how much energy they can send back to the public power grid. Whether it is a small photovoltaic system on a domestic roof or a large-scale solar plant of several 100kWs the generated energy is being consumed directly by the appliances on site, only a small amount of energy escapes back to the grid.

What happens when nobody is at home and the consumption is of standby devices is negligible ? We end up exporting almost all of the solar generated energy to the national grid. The Distribution Network Operators (DNOs) are right to say that they do not really like to receive back the “unwanted” energy.

Export Limitation – Control the PV Power that is exported to the electrical grid.

G100 simply means that only a pre-determined amount of energy can be exported back to the grid. To avoid any disturbances with the grid, the DNOs do not have to take any actions for the large amount of surplus energy entering the national grid, this is the case on holidays and weekends when the producers of green energy are not at home to make use of it.

REQUIREMENT: The scheme has hard wired communication links between the various components

The communication is made via Modbus RS485 output

REQUIREMENT: The export limitation scheme operates signals to the generation to reduce output within 1 second.

REQUIREMENT. The scheme is fail safe and limits export if the export limiter fails or loses its power supply

If the controller or the energy meter fails the export energy will remain to the agreed level or less.

REQUIREMENT: When the export limitation scheme operates, it will reduce the exported active power to a value equal to or less than, the agreed export capacity.

Power export peaks of typical load steps are limited by the export control circuit within 5  sec.

Note: In order to run 0-Watt closed loop control with PV system, it is required to operate a base load (self-consumption) of at least 0.5% of the rated output power of the solar inverter.

The energy meter is the power measurement unit and the export limitation is solely calculated by the inverter and communication protocol and no other hardware. Any schematic will therefore not comprise of additional discrete units such as detailed in G100 (Load Control Unit, Interface Unit, Generator Interface Unit or Control Unit).

The Voltacon system does not make use of resistive, inductive or any other type of load to dump excessive energy, including water heaters, therefore there are not additional harmonics due to the Exprort Limitation System functioning.

The inverter generated harmonics are stated in the respective G83/G59 certification.

Voltasol range of G100 certified export limitation scheme. Available models 3kW, 5kW, 5.5kW and 10kW. The inverters operate with energy storage at 48V. The most affordable solution for self-consumption and full control of the generated power.

The ELS may be programmed with a site export limit in kW and is set within a password protected menu to prevent system owner override. The limit can also be set to zero, upon which the inverters output relays will open circuit the inverter to give a true zero output. There is also the option to set P(V) limits should the DNO specifically request this to prevent exported power above statutory voltage limits. The regulation states The ELS must detect an excursion and reduce the export to the Agreed Export Capacity or less within 5 seconds

Discover our hybrid grid tie inverters with G100 certification
The new regulations are clearly illustrated in the diagram below. In this particular case we added the energy storage as a back up. The installation of batteries are not interacting the with G100 compliant scheme. The stored energy is also regulated for self-consumption.
Share
Print page
0 Likes

This site uses Akismet to reduce spam. Learn how your comment data is processed.